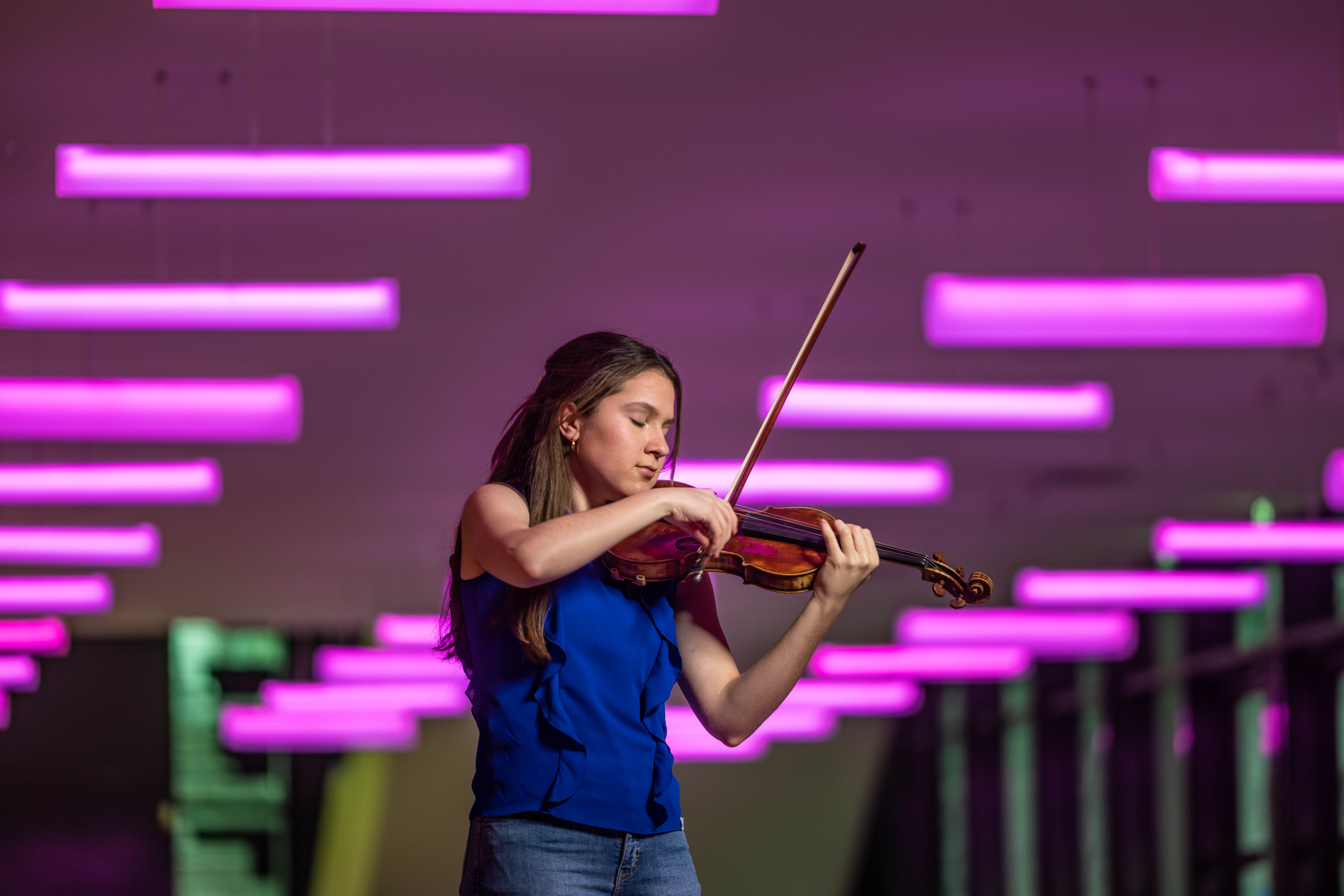 Thumbs up for the collaboration with the Grachtenfestival! Because as a result, BF can grant a yearly encouragement award to a young musician. It’s all in the line of founder Willem Bunschoten’s words: the future of classical musical lies with youth. So, as a Fund we step up for you. And of all our endeavours, the Bunschoten Younger Talent Award (in Dutch: Bunschoten Jonger Talent Prijs) is the one most visible!

In 2021 we had the honor of giving our award to violinist Luca van der Waals. She has been playing the violin since her fifth and has been taking lessons at the Royal Conservatorium in The Hague, with Kerstin Hoelen. Luca has performed on many competitions and has won awards at the Prinses Christina Concours, the Concertgebouw Concours, the Iordens B Vioolconcours, the Jong Talent Concours Maassluis and the Florence Concours Mini. She was also the guest, as a Young Hero, of Paul Witteman, and performed during his television show Podium Witteman.

‘That needs to be more’

BF spoke to Luca in the midst of her busy schedule that, besides playing the violin, also means school (Dalton College The Hague), soccer and playing the piano. What’s her favorite activity? ‘What I like most is the combination,’ says Luca. ‘For instance, after practicing and learning I like to go out for some serous sport practice.’ Which doesn’t mean that it leaves Luca indifferent. ‘Last year I made the clear choice for the violin. If there happen to be two things on the agenda simultaneously, like on a Saturday, the choice will always be the violin. And yes, that which you do most often, eventually also becomes the easiest.’

Of course, these times of lockdown are at times becoming a nuisance to Luca too. ‘I haven’t had soccer training for two weeks now. As a result, playing the violin becomes a little bit more trying; there are hardly any distractions left.’

When did playing the violin become the main thing?

‘It sort of just happened. My attitude is always: just enjoy making music. So, it’s not really on my mind. When I’d been going to the Conservatorium for a while, they asked me how long I practiced each day. At that time, it was an hour. To which the reply was: “That needs to be more.” I felt that made sense, so I went with it and started practicing for an hour and forty-five minutes a day, but I do remember thinking: O.K., this is serious.’

Can you tell us something about the instrument you play on?

‘I’ve played on an older violin for many years. Also, because a lot of people say it’s a better way of learning how to play. But now I have a newly built violin — my parents bought me a Neureither — and I like this one a lot more.’

Luca knew nothing about the Bunschoten Younger Talent Award prior to the award ceremony. She had, however, received a request for an extra radio interview, to be held right after performing during the Canals Festival Amsterdam 2021. ‘It’s really great to perform without being aware of any of that. You’re enjoying the playing, and then on top of that you get that award afterwards, which is really a very nice surprise. By the way, I do think that my mother knew it beforehand.’

As to spending the money of the Award: she has given this some thought. ‘Now that I have a new violin, I’ll want my own bow eventually,’ says Luca. ‘It’s not something you can decide overnight. I’ll probably save the money until I stumble upon a bow that I like.’

Do you have a tip for other young participants of contests?

When being asked if she has a tip for young musicians, Luca looks doubtful. ‘I do not yet have the experience you need to really give tips. What I do think: when you’re really young, it’s not good to think of playing music as a contest. Your performance will be best when you can simply enjoy the playing. Having a goal can help while you’re practicing. But the thought of a possible award should not be top of mind.’